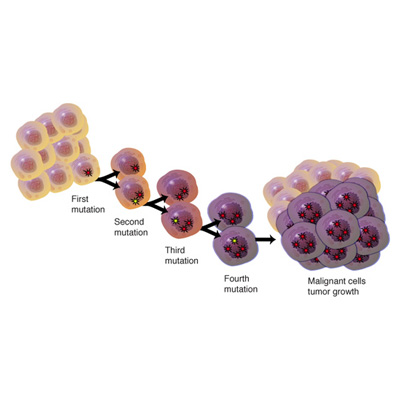 New research is demonstrating that the etiology of cancer is complex. Epigenetic modifications of the genomes of cancer cells appear to be quite important. These are changes that do not necessarily reflect the exact DNA sequences within a cell, but alter, by various means, the expression of the underlying code. It is increasingly apparent that epigenetic modification may be as important as genetic mutation in the transformation of a normal cell to a cancer cell. This does not change the fact that many cancers are induced by infectious disease which itself can be considered an epigenetic variable.

Such epigenetic mechanisms are being successfully defined. These include DNA methylation, arguably the most researched marker, by which the methylation profile can be linked to tumorigenesis as promoters of unlicensed cell reproduction. Alternatively, hypermethylated DNA zones can result in consequential gene silencing, which is considered itself to be a form of carcinogenic epigenetic mutation. It is also theorized that hypomethylation in parts of a genome can lead to chromosomal instability and the activation of transposable elements which can increase cancer risk or directly induce it.

Recent studies have implicated an epigenetic signature that can predict whether a woman may develop breast cancer, even without those BRCA gene mutations that are typically considered a prime risk factor. An epigenetic signature in women with a mutated BRCA-1 gene has been linked to increased cancer risk and lower survival rates in a study conducted at the University College of London.

Interestingly, a new epigenetic therapy designed to treat cancer by regulating gene expression has been cleared for Phase I trials. A recent clinical trial of a small molecule inhibitor drug of a particular class of proteins helps to control gene expression. This epigenetic control mechanism has shown initial promise in the treatment of refractory carcinomas. As the researchers note, the success of this initial trial, albeit limited, points the way for other investigational epigenetic cancer therapies. Thus, our emerging understanding of epigenetics if offering profound clues to both the causes of cancer and its cure.